My Other Projects and Sites

No matter what type of story you like, stories are all focused on the same thing: the journey from one point to another.  Sometimes these points are physical locations, and sometimes they’re internal, emotional journeys that realistically take place in a matter of seconds.  Nevertheless, as story consumers, we are partaking in a journey, usually with the focus being on one or more characters.  With this in mind, there is a major expectation that comes with the concept of a journey: change.  When a character goes on a journey, they are expected to grow.  This growth doesn’t have to be positive, but nevertheless characters are expected to show how a particular journey affected them.  This is not only important for making a story good, but also important for making a story impactful.

Unfortunately, character growth can be a hard concept to master for beginners (and even for those more experienced at writing).  However, I feel if you break it down, there are five basic types of character growth that you can use to create a compelling narrative.  Today, I would like to talk about these five types a little bit, breaking down the larger concept into more digestible chunks.

With no time to lose, let’s get into it!

Picture courtesy of Clker-Free-Vector-Images on Pixabay.

Of the five basic types, I personally believe a change in skill level is the hardest to master.  After all, characters can be any number of things: lawyers, adventurers, blacksmiths, card duelists, pianists, and so forth.  Unfortunately for writers, there is no possible way to be an expert in every single skill to know how to differentiate a novice from a master offhand.  Thus, of the character growth types, this is definitely the one that will inevitably require the most research.  Nevertheless, a change in skill level can be a great way to show how a journey and practice has changed a character.

This is an especially useful type for stories that revolve around characters who are trying to achieve success via a skilled craft.  Maybe they are an aspiring comic creator who is honing their drawing skills to earn serialization.  Maybe they are a pianist who dreams of playing to a sold out show.  No matter what the setup, if the story needs the character’s skills to improve or degrade in some manner, this is what the story should aim to show over the course of the journey.  For example, if it’s a swordsman who is improving, demonstrate how their stance goes from clumsy to confident and purposeful as the journey goes on.  Remember, though, that degradation also applies, so perhaps a skilled swordsman gets an injury and thus becomes more easily bested.  Either way, this change in skill shows that the journey had weight on the character’s life.

Before we leave off on this point, there are two things to keep in mind.  First off, skill level change demonstration is often reliant on comparison.  If everyone around the character gets stronger at the same pace without any showcases of how the character has improved, the growth is basically negated.  Second, skill level changes are usually more effective when combined with one of the other types.  However, it is still a great type to utilize to show a character is learning during their journey in the more traditional sense. 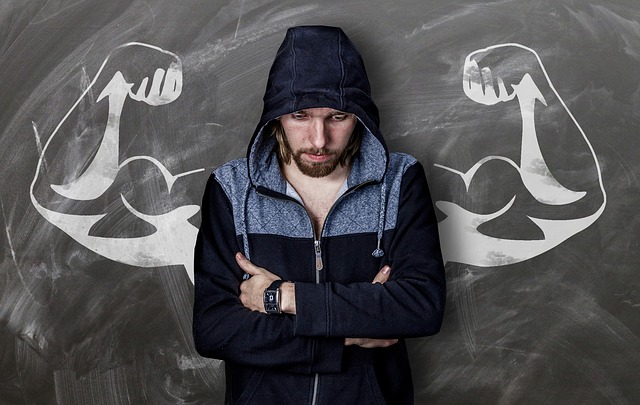 Picture courtesy of NeuPaddy on Pixabay.

One of the easier types to master for character growth is having a character overcome a personal flaw or obstacle within the course of the story.  Like skills, these encompass a wide range of topics, from alcoholism to physical disabilities.  Showing a character deal with and ultimately succeed against these shortcomings is a great way to show growth.  Of course, they don’t have to be “cured” of the flaws completely.  Rather, it is more important to show the character dealing with them successfully in order to accomplish their goals (when previously they struggled, of course).  There should be a noticeable change in their awareness of their shortcomings, and their attitudes and actions towards it should reflect it.  Keep in mind, though, that you should never eliminate all short-comings in a character during the journey.  There should remain unseen or challenging flaws that the character can’t deal with, as this is what makes them human.

Again, growth doesn’t have to be positive though.  Maybe the character gains a short-coming during the course of the journey.  For example, an optimistic adventurer might become greedy and gold-obsessed over the course of the journey after experiencing what money can get them.  It still qualifies as a change, though, which showcases the journey was not for nothing and reflects that short-comings are something we always have to deal with.

While similar to shortcomings and often going hand-in-hand with it, a change in self-view is a lot more internally focused in how the character perceives themselves.  Does the character view themselves as a saint even though they do a lot of sinful things?  Does the character think of themselves as just an average person?  Does the character lack self-esteem and think they’re the scum of the Earth?  Self-perception is one thing that changes a lot over the course of real human lives, as each experience teaches us more about ourselves that we didn’t know.  Similarly, showing this with characters is reflective of this real life experience and demonstrates that the story events aren’t happening in a vacuum.  Rather, each event teaches the character something about themselves, and that in turn influences their actions.  As such, changing a character’s attitude towards themselves is another great way to reflect the internal growth that is happening.  Perhaps a character becomes more or less forgiving of their personal choices, or maybe it is simply a change in confidence because the character realizes their skills are different than what they first thought.  Regardless, always remember that characters have their own perceptions of themselves, and that you can change these to suit the character’s journey.

Image courtesy of geralt on Pixabay.

Every single person views the world in a unique way, and the same can be said of characters.  While some characters might think the world is one where only the fittest should survive, another character might think it’s the duty of the strong to protect the weak.  There are hundreds of different ways someone can view the world or the people in it.  However, these views can also change via experience, which is something you can use to your advantage to show character growth.  For instance, maybe a character believes there are no good people in the world, but in their journey they’re constantly confronted with the fact that people are out there doing charitable acts for no self-interested reason.  By the end of the story, the character views the world in a different light, and believes that people are basically good.  Since these changes in character reflect the experiences of the journey, it makes the narrative more compelling.

As a note for this type especially, however, make sure the character’s world-view is actually confronted with sensible things.  If a character suddenly changes without significant events that clearly affected them, the growth will feel hallow and unwanted.  This is one that should be handled with great care to make sure the events match the change.

Picture courtesy of mohamed_hassan on Pixabay.

It is my hope that, by breaking down character growth into these five types, beginner writers will have a better understanding and foundational way of thinking about their characters.  Character growth is essential to creating a successful narrative, as the point of journeys in a story is to show how life and experience can change us.  Thus, it is an element of writing that needs to be kept in mind while one writes their characters.  Always remember, though, that character growth doesn’t have to be positive.  A character can grow worse in a number of ways, and that still functions as a compelling change that reflects the journey.  Whether positive or negative though, make sure the journey counts in your story.  Until next time, happy writing!